Guess who came crawling back to me? 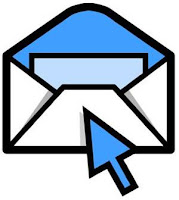 I had a feeling that Hotmail would come crawling back after I announced our breakup publicly on Friday (http://cestlaviebyelle.blogspot.com/2010/03/breaking-up-is-hard-to-do.html). True to form, Hotmail did just that-around 12:45 AM that very night!

I was getting ready to go to bed and decided to check my Blackberry one last time before turning the lights off only to find my missing emails from the week. They came in one after one...it was a walk of shame of sorts. The nerve of Hotmail to show up like that when I had clearly decided to move on with Gmail. What's a girl to do?
While I am happy with Gmail's courtship so far, I have to admit that I really miss Hotmail's layout and ease of use. Let's face it, I was with Hotmail for over 7 years. It just feels right and comfortable to me. However, I cannot forget the way Hotmail so rudely chose to end our relationship with no explanation last week. Gmail was more than eager to accept my offer to date unlike Hotmail who just used and abused me. So, now I am stuck between the two. I'm still with Gmail, but I am seeing Hotmail again. I guess it's true that all you need to get email is another email address.
Posted by Elle at 2:13 PM